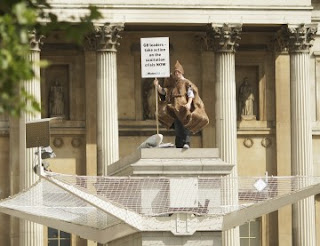 This photo is from a Globe and Mail article on Oliver Parsons- Baker who, it's hard to tell, is dressed as a giant turd in order to bring attention to the plight of people without clean water. He's one of many Trafalgar Square Plinthers who mix art and activism. His sign says, "G8 leaders - take action on the sanitation crisis NOW."

When we're talking about people getting sick from drinking dirty water, the vast majority of the time it's not because of industrial pollutants clouding the water. It's feces. Human feces.

When I saw the Borat movie, I laughed at parts, but thought the bit with him defecating in a plastic bag was too over the top. Come on - who doesn't know how to use a toilet?! 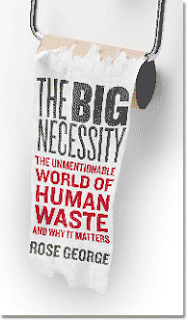 Then I read The Big Necessity: The Unmentionable World of Human Waste and Why it Matters by Rose George. Lots of people, a good 40% of the world, don't have access to toilets, and many have never seen one. And the crisis of water-borne diseases spreading, and babies dying of dehydration isn't primarily about drought or environmental catastrophes. It's about people not having adequate sanitation. The water crisis is really a poop crisis.

And the plastic bag scene? They're called helicopter toilets. In some places people really do use a plastic bag, then throw it up on the roof. At the very least it keeps the streets clean right?

Here's a few tidbits I got from the book and share with classes. Page numbers follow each fact:

Four in ten people in the world have no access to any type of toilet, bucket or box. They are open defecators. They live surrounded by human excrement that gets brought into the house on their feet, fingers or clothes. (2) A toilet isn't a right; it's a privilege. A huge privilege.

"A gram of feces can contain 10 million viruses, 1 million bacteria, 1,000 parasite cysts, and 100 worm eggs." (2) This is the reason I have issues with using green bin "compost" that includes dog feces and diapers as fertilizer on food. Diarrhea kills a child every fifteen seconds. It kills more than AIDS, TB or malaria. 90% of diarrhea is caused by fecal contaminated food or water. It's not a water-related disease, but really a shit-related disease. We focus on water sources and pollution, but not on the real cause of the problem: poop in the streets. But nobody wants to talk about that. The greatest hurdle that has saved the most lives worldwide isn't medicine, but sanitation. "No act of terrorism generates economic devastation on the scale of the crisis in water and sanitation. Yet the issue barely registers on the international agenda." (68) "Cholera and typhoid kill so many million kids a year, which amounts to two jumbo jets full of children crashing every four hours." (78)

Ninety percent of the world's sewage ends up untreated in oceans, rivers, and lakes. Most of that comes from big cities in the developed world. "Even the best-equipped humans still don't know what to do with sewage except move it somewhere else..." (6)

Sewer systems in large cities are stymied by oil and fats poured down drains, and by garbage flushed down toilets or dropped down the sewer grates in the streets: cellphones, Q-tips, pads, goldfish, etc. Flushing with water means we increase the gallons of waste flushed by twenty times. (19-21) At our cabin we use a composting toilet - the waste product goes under the trees deep in the bush, not on the garden or anywhere near a water source. The toilet uses no water at all. When you think about it, it's kind of insane to use drinking water to flush the toilets. We got the bottom of the line model, and I highly recommend it.

Many people are getting involved in this crisis including Matt Damon (NGO H2O), Jay-Z, Chris Martin... "Globally, if universal sanitation were achieved by 2015, it would cost $95 billion, but it would save $660 billion." (72) One toilet for the few people on NASA's space shuttles costs over $20 million. (225) Unfortunately, sanitation wasn't part of the Millennium Development Goals. It's still seen as less vital than malaria and AIDS aid even though it kills far more people.

Shit can be used to build bricks, and biogas can cook your food. (111) It's being used as an alternative to propane or coal in India and China. (124)

There's an entire chapter devoted to biosolids and the hazards of having sludge too close to living quarters or food (or crops). It hasn't been studied enough for anyone to say conclusively that it's a problem, or else we'd have to stop spraying crops with crap. "The waste-water industry is intimidating...dissent is not encouraged.... We are their lab rats." (169)

The best part of the book, I think, deals with human psychology. How do we change people's habits? "Health messages rarely have an impact.... Reason rarely persuades people to change behaviour.....Target the product to wants not needs." What do people want? Status and friends (even more than cash, which is really just a means to get status and friends). So some activists in this fields use the catchprase, "Building dignity through toilets." They also found it useful to awaken disgust, to use crude language about they way people are living, in order to encourage a different way to live: pit latrines are the most economical system for impoverished countries. None of the people that are developing ideas discussed in the book have applied for patents. "None wants to remove his useful ideas into expensive inaccessibility." (218)

By 2050, half of all people will live in countries that are chronically short of water. Yet we waste it so carelessly all the time. In times of drought, people stop flushing toilets unless absolutely necessary. "In a drought context, darker yellow pee in toilets signifies moral rectitude." (236) People can get used to anything.

"In 1940, Harold Farsworth Gray concluded that "urban man today still unnecessarily pollutes streams, bathing beaches, bays and estuaries, without benefit of the excuse of ignorance which was available to his ancestors." We have less ignorance and less excuse. The first thing sanitation needs is a spotlight shining on it. It needs to be unshackled from shame." (238)

Arendt - On Violence
Barlow - For the Love of Water (film)
Carr - The Shallows: What the Internet is Doing to Our Brains
Chomsky - Requiem for the American Dream
Chomsky - Understanding Power
Curtis - History of Psychoanalysis
Curtis - Hypernormalization
Davis - Disconnect
Davis - The Secret History of the War on Cancer
Diamond - Collapse
Ferguson - Inside Job (film)
Ferry - A Brief History of Thought
Freud - Beyond the Pleasure Principle
Freud - Civilization and its Discontents
Freud - Future of an Illusion
George - The Big Necessity
Gertz - Nihilism and Technology
Gertz - Nihilism
Greenblatt - The Swerve
Greene - The End of Suburbia (film)
Hanh - The Miracle of Mindfulness
Hari - Lost Connections
Hedges - Empire of Illusion
Hume - A Treatise of Human Nature
Kendi - How to Be an Antiracist
Kenner - Food Inc. (film)
Klein - Shock Doctrine
Kolbert - The Sixth Extinction
Kolbert - Under a White Sky
Laird - The Price of a Bargain
Mann - The New Climate War
Manne - Down Girl
Marshall - Water on the Table (film)
McGrain - Ethos (film)
McQuaig - Sport and Prey of Capitalists
Monbiot - Heat
Monbiot - Manifesto for a New World Order
Monbiot - Out of the Wreckage
Montaigne - "Of Cruelty"
Montaigne - "Of Fear"
Montaigne - "Of Friendship"
Nagle - Kill All Normies
Nyks & Scott - Disruption (film)
Piketty - Capital in the Twenty-First Century
Reich - Inequality for All (film)
Rich - Losing Earth
Russell - The Conquest of Happiness
Sandel - The Tyranny of Merit
Saul - A Fair Country
Seneca - On the Shortness of Life
Slee - No One Makes You Shop at WalMart
Smith & Lourie - Slow Death by Rubber Duck
Snyder - On Tyranny
Varoufakis - Taking to My Daughter about the Economy
Wallace-Wells - The Uninhabitable Earth