Ibram Kendi's How to be Antiracist 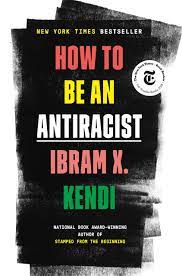 Just on Friday, Vancouver police were looking for a 40-year-old suspect, and arrested an 81-year-old Black man who happened to be a former judge with much to say about the state of the police department that would shackle a man on an early morning walk. We know how horrifically racist some police actions have been, and Ibram X. Kendi's bestseller takes us through to solutions for it all. It's a beautifully written  book that takes us step by step through his own journey from racism/not-racism towards antiracism mixed in with related history for context. It reads like a biography, and then you realize you've been significantly educated by the end of it! I added a few more points to this Canada/US history of colonization chart to avoid cluttering up the main ideas below.

He starts each chapter with definitions to help us see the more useful perception of these problems. Here are two key sets of terms:

"The claim of 'not racist' neutrality is a mask for racism" (7). "The construct of race neutrality actually feeds White nationalist victimhood by positing the notion that any policy protecting or advancing non-White Americans towards equity is 'reverse discrimination'" (20). "White people have their own dueling consciousness, between the segregationist [separate people who don't accept the dominant culture] and the assimilationist [adopt the dominant culture's way of life]: the slave trader and the missionary" (31).

Read more »
Posted by Marie Snyder at 3:52 PM No comments:

Email ThisBlogThis!Share to TwitterShare to FacebookShare to Pinterest
Labels: Discrimination 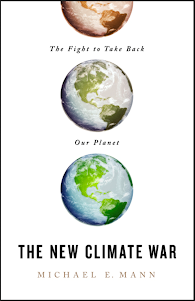 It's not all that new. There are tons of books on this topic now, so it would be hard to find a completely new angle. But the public still needs to learn the basics, and Mann does a good enough job of explaining it all in a very conversational writing style that's approachable for casual readers of science. His big argument, however, is with most of those other books and anyone who errs on the side of worst case predictions of the future because the doomers might provoke us to give up the fight, and this war has just barely started.

I still know some people who erroneously believe that e-cars are evil because they use cobalt, and fast fashion or littering is the main cause of climate change and are against any carbon tax because it will harm poor people (despite my explanation of the rebate system). They're convinced that vegetarianism is more important than decreasing fossil fuels use, but also that persuading others towards vegetarianism is elitist and privileged because it's cheaper to eat beef, despite my attempts to show them, with grocery store prices, that it's cheaper to buy bulk beans and lentils and cook from scratch; it's only more expensive if you buy 'near-meat' products. Although it takes more time than going through a drive-through, it doesn't have to if you cook a pot full of rice and lentils once/week. I used to live well below the poverty line, and dried beans kept me and my kids afloat. But somehow beef is the road to equity??

When I ask for sources, it's all Tiktok videos, so that's where climate scientists and activists have to head next! It's clearly still necessary to explain all this over and over in short soundbites with intense visuals that people will take away with them and share endlessly. These types of books need to be promoted by influencers.

Mann has written a different type of climate change book in that it feels sort of personal, and he names lots of names of individuals, corporations, and countries. He seems a little snarky at times, which can be fun, but it's definitely different that the usual dry facts and data. He comes down hard on some of the people and ideas I've supported in the past, which has given me pause, but I don't fully support his take-downs. He wants to mend the rift between various factions of environmental movements, but he's doing so by arguing that they're all wrong. That might not be the best way to build bridges.

The gist: denial isn't the biggest problem anymore; now it's "other breeds of deceivers and dissemblers, namely downpayers, deflectors, dividers, delayers, and doomers" (45). We have to do both individual actions and corporate /political actions, and ignore any fight about which is better or faster. We have to do ALL THE THINGS! (I argued the same last year.) "At the center of the acrimonious debate over individual action versus systemic change is a false dilemma. Both are important and necessary" (68).

"The solution is already here. We just need to deploy it rapidly and at a massive scale. It all comes down to political will and economic incentives. . . . A renewable energy transition would create millions of new jobs, stabilize energy prices in the absence of fuel costs, reduce power disruption, and increase access to energy by decentralizing power generation" (143-4).

Read more »
Posted by Marie Snyder at 3:49 PM No comments: