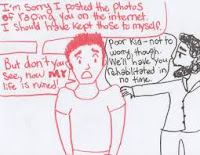 On the wake of the series 13 Reason's Why gaining a following on Netflix, with some teens actually planning to wear blue nailpolish on April 24th to commemorate the life and untimely death of a fictional character, maybe it's necessary to be reminded of this real life Canadian case. In that case April 7, 2013 is the day to remember.

The act isn't dissimilar from torturing an animal and showing pictures to people.  It's a behaviour that is absolutely depraved.  Who looks at those types of visuals without looking differently at the goon who took them?  Unfortunately, there's enough of an audience that we need to be afraid.  For some people, their body responds to the visuals even if their brain might hope it didn't.  So clips are saved and circulated endlessly.

Circulating the film is also a mean of re-shaming the act.  After years of the rally cry, "Rape is a crime, not a shame!" some perpetrators are working hard to make people ashamed to be raped for obvious reason:  if they're embarrassed by it, they won't tell.  But Rehtaeh did tell.

Read more »
Posted by Marie Snyder at 9:50 AM No comments: