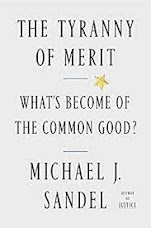 This excellent read, The Tyranny of Merit, by Harvard philosophy professor Michael Sandel, actually shifted some of my thinking, and I love a good lightbulb moment provoked by a book! I found the book sometimes a little outside my reach in places enough to need to read a few chapters numerous times, but I think I've got the gist of it all.

In a nutshell, some of us hope that judging people based on their merit makes for a more fair and just system, and the education system can be used as a sorting machine. The promotion of merit and of the sorting tools we use to determine who deserves to rise to the top are seen as part of an open system of global thinking. Rejecting that position, then, it is believed, is clearly aligned with closed-minded thinking, BUT this is all a ruse brought to you by neoliberal politics. It's born of the illusion that we can create a level playing field of equal opportunity, which is a commonly touted argument. Less common, however, is Sandel's captivating argument around what it means to deserve anything and his claim that, even if we could have perfect equality of opportunity, a meritocracy brings with it some nasty side effects: "It would generate hubris and anxiety among the winners and humiliation and resentment among the losers--attitudes at odds with human flourishing and corrosive to the common good" (120). He ends with some plausible but difficult alternatives to our current way of thinking--in education, work, and through contributive justice--which require an entire overhaul of thinking reminiscent of Charles Taylor's notion of social imaginaries: we have to change our beliefs before we'll ever be able to change our behaviours.

We can't get a fully realized meritocracy. The term was first coined just in 1958 in a dystopian novel; it wasn't originally meant to be seen as a solution or a term of praise. Then in the 80s, Reagan created the belief that "market mechanisms are the primary instruments for achieving the public good" (21) and deregulated banks and businesses under the belief that, "Provided they operate within a fair system of equal opportunity, markets give people what they deserve" (62). Since, in theory, everyone can compete equally (the rhetoric of rising), government helped out by lowering taxes to remove barriers to success, which then provoked a dramatic rise in tuition fees. We tolerate inequalities because of the American Dream that suggests we can't win without some losers beneath us: Everything we do is fair and just provided people worthy have equal opportunities to access higher education; however, governing elites have the "responsibility for creating the conditions that have eroded the dignity of work and left many feeing disrespected and disempowered. . . . upheavals we are witnessing are a political response to a political failure of historic proportions" (19). We're starting to see the light.

Read more »
Posted by Marie Snyder at 7:21 PM No comments: