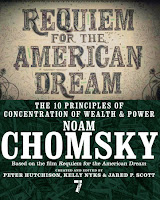 Ralph Nader interviewed Noam Chomsky last Saturday about Chomsky's new book Requiem for the American Dream and film of the same title currently on Netflix. He's trying every type of media to spread this understanding of history, to "throw fact against myth."

I saw the film back in December and outlined his ten-point plan then. The interview followed that format as well, so I'll just summarize the key points here as succinctly as possible. The following is all made of direct or close to direct quotations from Chomsky with bits of Nader included. Check out the transcript if you want the whole thing verbatim to mine for quotes. This is just the idea.

Chomsky's Requiem for the American Dream

This is Chomsky's last long-form documentary. It came out in January, but I hadn't heard about it until recently. I paraphrased/transcribed the 72 minute video liberally with links to further readings below.

It's about the American Dream: the idea that you can be born poor but work hard enough for a home and car and good schools - that's all collapsed. We profess to like the values of democracy, so public opinion should have an influence on policy and the government should carry out actions determined by the population, but the privileged sector doesn't like democracy. We have extreme inequality with a super wealthy group in the top 1/10th of the top one percent. It's unjust in itself, but it's got a corrosive effect on democracy.


The 10 Principles of Concentration of Wealth & Power