A post in which I gush a bit about it all.

Jane came to my city last Wednesday night. I had so much to do this week, but I had the tickets already, so I went begrudgingly. Yet when she walked on stage, I surprised myself by getting a bit teary. It's a curious reaction to meeting a pivotal role model from my childhood, someone whose life I envied right up there with Farley Mowat's life (possibly) in Never Cry Wolf. And I didn't even meet her - we were one row from the furthest point from the stage. But still...

She radiates warmth and humour and genuine kindness. She embodies love and patience. She speaks slowly and deliberately as she sipped from a flask of whiskey throughout the evening. She's on a tour of speaking engagements which she does without taking a speaker's fee so that all the proceeds can go to saving habitat and animals and people. She's living a truly ethical life; she should be revered as a wise woman, an elder - one of very few who might be able to guide us out of this mess.


And here's what she told us (loosely paraphrased unless in quotation marks):

Read more »
Posted by Marie Snyder at 6:48 PM No comments: 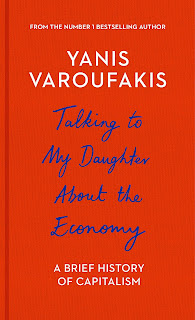 First published six years ago, Varoufakis's book, Talking to My Daughter about the Economy, addressed to his then 12-year-old daughter, is a quick read in economic theory that would benefit from some dates and locations in its lessons to cement examples in history. He was still discussing the text in a podcast last June, so he must still stand by his claims. And it rests on one very important point: "You cannot afford to roll your eyes and switch off the moment words like 'economy' or 'market' are mentioned" (10). We've lost the luxury of ignorance now. We need to all understand how the system works.

Yanis Varoufakis was the finance minister in Greece for six months in 2015, and we know what happened there. Some say he couldn't possibly have fixed the problem, particularly as an outsider of sorts. When asked if he was sorry he hadn't resolved things sooner, he responded,


"Your question, sir, is the equivalent of putting to the British people in 1940 that Winston Churchill's speech, with which he raised the sentiment of the British people against the invaders, was responsible for the suffering of the Londoners after the Blitz or during the Blitz. The shortages, the rations, and so on and so forth. There's no doubt that freedom and rationality sometimes needs to be defended by means of a great deal of suffering. But to turn to the victims and blame them for what the villains have done is the height of audacity."

Regardless Varoufakis's role, one critic of his action as Greece's finance minister, the Minister for Finance in Ireland, who expected to hate the book, was surprised to find it "a stimulating and elegant perspective on market economies . . . accessible but not simplistic. . . . I found the section on public debt somewhat poetic. Even if this dimension is not evident to other readers, the lucidity of the explanation will be." But he found the solutions to it all "baffling in its brevity."

Read more »
Posted by Marie Snyder at 4:10 PM No comments: