Is Populism the Way of the Future?

I watched the recent, heavily protested, Munk Debate between good buddies on the right, Steve Bannon and David Frum. The issue they were debating was, "Be it resolved, the future of western politics is populist, not liberal."

Spoiler alert, the results were a draw, in that the audience in general didn't change their opinion on the issue. At the end of the debate, the moderators revealed incorrect results indicating a sweeping win for Bannon, but here's their retraction: 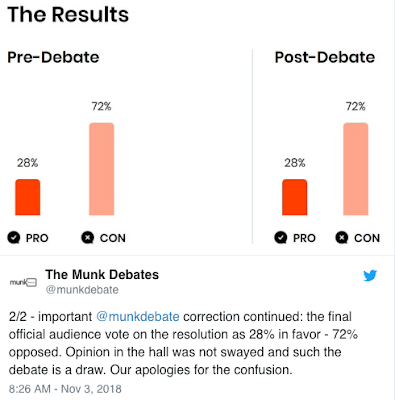 72% of the audience still disagrees with populism regardless Bannon's arguments. Nobody defined populism throughout the evening, but I take it to mean politics that focuses or appeals to the ordinary person. It's an ideology that pits the common folk against the elites. It's being juxtaposed with liberalism, which generally means politics that focuses on individual liberty and equality, and an accusation of populism typical suggests that a politician will change their tune depending on popular opinion. I'm not sure they're as different as is being suggested, but I'll get to that at the end.

Read more »
Posted by Marie Snyder at 6:07 PM No comments: