On Kate Manne's Down Girl 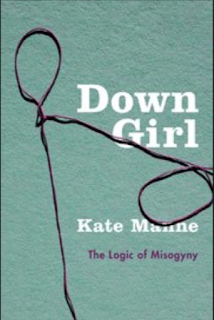 With thorough argumentation and heavily footnoted facts brought to the table, Down Girl, by Kate Manne delineates misogyny from sexism and hopes "to offer a useful toolkit for asking, answering, and debating" (13) issues centred around misogyny.

Right off the bat, let's clarify that it's not remotely a man-hating thesis. It's about looking at how we all are affected by the beliefs floating around us.


"One need not be a man to be a misogynist either: women can fit the description too, as can non-binary people. . . . many if not most of us at the current historical juncture are likely to be capable of channeling misogynistic social forces on occasion . . . unwittingly policing and enforcing distinctively gendered norms and expectations but also, on my analysis, over-policing and over-enforcing gender-neutral and potentially valid norms, e.g., genuine moral obligations" (77).

A primary issue discussed is that women who compete for typically male-dominated roles, "will tend to be perceived as morally suspect in at least three main ways: insufficiently caring and attentive with respect to those in her orbit deemed vulnerable; illicitly trying to gain power that she is not entitled to; and morally untrustworthy, given the other two kinds of role violations" (xiv). Women have an extra layer of barriers to wade through to get to positions of powers because everyone (men and women) has been socialized to believe women are the caretakers of the world. It's similar to what Neil deGrasse Tyson describes in the world's reactions to his efforts to excel in science - the path of most resistance:

The Smell of Your Moral Judgement

"If you're going to tell people the truth, make it funny or people will kill you."


I just watched a series of videos (65 minutes if you watch them all in one go) by Innuendo Studios that were made specifically about the backlash against Anita Sarkeesian, the feminist who questioned some of the choices made by video game creators, but the ideas in these videos can be applied to explain the backlash to any social movement, like environmentalism.

First, they look at why people get so angry at other people who bike to work or are vegan or don't like to play rapey video games and put something else out there instead. Why do people treat feminists and environmentalists and anyone actively engaging their moral agency with contempt?  Because we're dealing with (paraphrased), "a condition, somewhat like drunkenness, in which some of us become a belligerent and dangerous asshole when we feel our conception of ourselves as moral human beings is being threatened."

Read more »
Posted by Marie Snyder at 2:40 PM No comments:

So NOW What? On Power, Sexual Abuse, and Celebrity Culture

A little over year ago, when I first heard about Louis CK's abuse of power, I was going to write a post suggesting he might actually be the guy able to fess up, apologize sincerely, and lead the way for other men to admit to their abusive behaviours. I'm a big fan, and he sometimes has just the right tone that he might be able to manage something of that calibre. But I didn't finish anything because how I feel is just all too complicated. At the time I only got this far,


He's right out there about difficult issues, dark issues, presented in a light way. He seems to care enough about ethics to go deep into some harsh topics. He already has bits about pleasing women and sexual boundaries in his act. Just imagine if he came clean and actually talked about it, honestly, and with humour, as only he can. Imagine how quickly he could change everything if he apologized. Live. Imagine if he were brave enough to do the right thing and turned himself in and, after the typical slap on the wrist, or maybe even a brief stint in jail, he actually added that experience to his next special as a cautionary tale about his abuse of power.

Imagine if he openly acknowledged the childishness of suggesting, because they just laughed when he asked if he could pull his dick out, that it was in any way a consensual act. Imagine if he explored his own power and revealed that he did it because he could, because he's in a place where he's become untouchable, so he is living without restraints on any behaviour. So he can do exactly what he like; and this is what he likes. And how dangerous that place is to be because lots of people like to do some weird stuff that couldn't happen without a power imbalance.

And then I watched in disbelief, for over a year, as he seemed completely unencumbered by the weight of his transgressions. He could have carved a path through it all, one that others could follow, but he maintained his course of denial. It didn't go away; instead it just festered around him. Now, even though Weinstein is so much worse by all accounts, his actions and his company's reactions and the many women who have come forward have been game-changers. The camel's back has finally broken.

Read more »
Posted by Marie Snyder at 2:36 PM No comments: