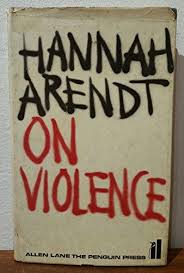 Unfortunately, this is really timely.

Arendt wrote this short book in 1970, but there's nothing in it that needs to be updated today. Absolutely nothing significant has changed; it's just more. She was responding to the violence of WWII, Vietnam, the student riots in Paris, and, most specifically, the People's Park protests in Berkeley, where she was teaching at the time as students attempted "transforming an empty university-owned lot into a 'People's Park'." Sheldon Wolin and John Schaar wrote about how the event unleashed an unnecessarily strong police backlash:


"A rock was thrown from a roof-top and, without warning, police fired into a group on the roof of an adjacent building. Two persons were struck in the face by the police fire, another was blinded, probably permanently, and a fourth, twenty-five-year-old James Rector, later died. Before the day was over, at least thirty others were wounded by police gunfire, and many more by clubs. . . . Tear gas enfolded the main part of the campus and drifted into many of its buildings, as well as into the surrounding city. Nearby streets were littered with broken glass and rubble. At least six buckshot slugs entered the main library and three 38 calibre bullets lodged in the wall of a reference room in the same building. Before the day ended, more than ninety people had been injured by police guns and clubs."

That was on May 15, 1969, known as "Bloody Thursday." The Kent State shootings in Ohio were almost exactly one year later. Arendt tries to make sense of it all through a look at the changing view of violence in society.

Read more »
Posted by Marie Snyder at 4:46 PM No comments: