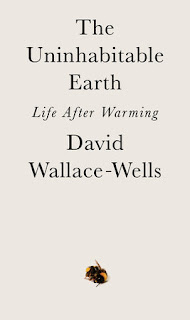 David Wallace-Wells's book The Uninhabitable Earth starts out with a repetition of facts that won't be news to anyone paying attention, but he has a lovely way with words.

Four of the last five extinctions were from greenhouse gases, and now we're adding carbon to the atmosphere 100 times faster than at any other time, and "guilt saturates the planet's air as much as carbon, though we choose to believe we do not breathe it" (5). In the last 40 years, more than half the worlds' vertebrate animals have died and the flying insect population declined by three-quarters (26). His focus is largely on humanity, but we'll be taking most other life forms with us when we go. Our continued actions are at the level of a genocide, and the "Kyoto Protocol achieved, practically, nothing; the the twenty years since, despite all of our clime advocacy and legislation and progress on green energy, we have produced more emissions than in the twenty years before" (9). Even if we stop short of the two degree mark, we'll still have a sea-level rise "to draw a new American coastline as far west as I-95" (13). "Our current emissions trajectory takes us over 4 degrees by 2100" (27). At 5 degrees, "Parts of the globe would be literally unsurvivable for humans"(39). And "heat death is among the cruelest punishments to a human body, just as painful and disorienting as hypothermia" (48).

Read more »
Posted by Marie Snyder at 3:38 AM No comments: 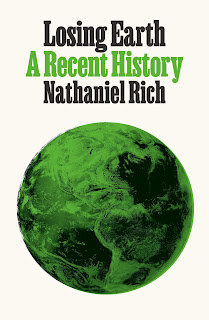 This is a quick read outlining the history of the efforts to do something to slow down fossil fuel use. Everything we know now about climate change, pretty much, we knew with great certainty forty years ago, in 1979. "The climate scientist James Hansen has called a 2-degree warming 'a prescription for long-term disaster. Long-term disaster is now the best-case scenario. A 3-degree warming, on the other hand, is a prescription for short-term disaster" (4). 5 degrees will bring the fall of human civilization. "The Red Cross estimates that already more refugees flee environmental crises than violent conflict" (4). We had a great chance to fix it all between 1979 and 1989, but we didn't take it.

"The common explanation today concerns the depredations of the fossil fuel industry, which in recent decades has committed to playing the role of villain which comic-book bravado" (6). But the fossil fuel industry was actually on board for a time. There are a whole lot of names and dates to keep straight below (I bolded the important ones), and the book, curiously, has NO index or footnotes! Rich wrote it as a compelling story, but I digest it better chronologically:

Read more »
Posted by Marie Snyder at 3:36 AM No comments:

Gertz on Nihilism - What IS it?? 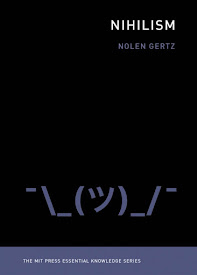 A year after coming out with Nihilism and Technology, Dr. Nolen Gertz wrote just plain Nihilism, an "examination of the meaning of meaninglessness: why it matters that nothing matters." It's a really short book, but it took a while to wade through it all. Here it all is even more briefly assembled with my own understanding here and there.

We typically think of nihilism as very simply meaning, "we believe in nothing" (4), but he counters that from the start with the polar opposite definition of Russian nihilism via Wendell Phillips in 1881: "the righteous and honorable resistance of a people crushed under an iron rule . . . the last weapon of victims choked and manacled beyond all other resistance" (2),  and then takes us through Western philosophy to get to a view that, "Nihilism is about evading reality rather than confronting it, about believing in other worlds rather than accepting this one, and about trying to make ourselves feel powerful rather than admitting our own weaknesses" (73).

I didn't love this epistemology section, but the book picks up speed afterwards.

First, on Socrates, Descartes, and Hume and nihilism via our inability to know stuff: Anti-nihilists "inspire others to question and ultimately reject the foundations of their beliefs" (21). Socrates (a social reformer) provoked people to question everything. Then Descartes (a self-reformer) warned that can lead to "inextricable darkness" (21). "For Descartes we embrace illusions because our reach exceeds our grasp, because our desire to know (the will) exceeds our power to know (the intellect)" (22). Then he gets to Hume's fork: For Hume, we can only know things we experience directly and things that are true by definition, and, Hume famously said, all else must be committed to the flames, so  "supporting an idea may not be so different from supporting a sports team" (25). Gertz's conclusion so far: "From a Socratic perspective, nihilism can be overcome by enlightenment. From a Cartesian perspective, nihilism can be overcome by self-restraint. But from a Humean perspective, nihilism cannot be overcome. It is simply a product of human psychology" (28).

Read more »
Posted by Marie Snyder at 6:15 AM No comments:

On McQuaig's Sport and Prey of Capitalists

Linda McQuaig's newest book, The Sport and Prey of Capitalists: How the Rich are Stealing Canada's Public Wealth, is a fast read full of local history and written as history should be written, as colourful stories about fascinating people! But, in order to try to remember any of it, I've whittled it down to the bare bones here. She comes down hard on Trudeau, both of them, and for good reason, but takes a generally non-partisan role in exploring the good and bad players in our history.

Her concern throughout: "We've failed to appreciate our heritage as a nation that has embraced public enterprise to great effect" (6). Then she traces our gradual acceptance, at a huge cost to our country, of the neoliberal policies of deregulation, privatization, and union busting through the history of specific industries affecting Canada today: the banking system, tar sands, railways, 407, hydro, and medicines.