"There's violence to knowing the world isn't what you thought. . . . Sometimes the world doesn't make a lot of sense, but how we get through it is, we stick together, okay?" - Gloria Burgle, Fargo 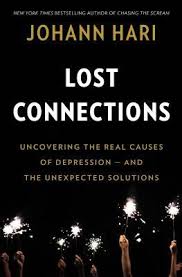 I watched Joe Rogan's interview with (interrogation of) Johann Hari about his new book, Lost Connections. Rogan wasn't quite buying what Hari is selling, which is unfortunate because his premise is intriguing. He told a few stories through the podcast, but his book, while still a casual read, is heavily footnoted, and his view thoroughly supported with the most up-to-date peer-reviewed research. He even encourages us to "Kick the evidence. See if it breaks. The stakes are too high for us to get this wrong" (14). It's just this: Anxiety and depression are not primarily caused by a chemical imbalance in the brain, and drugs only work a little bit for very few people.

He needs all the footnotes because his claims are extraordinary, and the worst thing would be if this were seen as a mere conspiracy theory against Big Pharma. This is just a brief summary without all the data and examples. He interviewed many contemporary researchers and compiled the evidence necessary to convince the masses of our wrong turn on this one. And it's not about the cellphones!