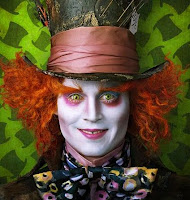 Chapter 5 of Slow Death deals with a naturally occurring toxin, the incredible element mercury.  When I was a kid, my dad broke open a thermometer on a glass plate to show me how wondrous it is.  We disturbed it with a pencil end, then watched it rejoin itself.  Very cool.  But he warned me to never touch the stuff with my bare hands.  When I saw The Cove, I thought the most disturbing part wasn't dolphins being slaughtered, but the footage of the children affected by mercury poisoning.  They looked a lot like the boy in this video...


Uses:
It's a natural element, but it's turning up in problematic areas because of the way we use it.  It's found in certain fish we eat.  It gets in the lake from the use and disposal of everyday items.  It's an electrical conductor in some electric switches, thermometers, electronics, batteries, fluorescent lights, the tilt switch that turns the light on when you open the fridge or your car trunk, fillings, and it's in vaccines, PVC manufacturing, hydroelectric dams, and the pulp and paper industry. It's also sometimes used to extract gold and silver in mining. Right now most of it comes from waste incinerators and coal-fired power plants.  It used to be used widely to cure many ailments like syphilis, and, of course, as a fungicide in hats.

Alternatives
* Make sure that all products containing mercury (like CFLs and batteries) are taken to the hazardous waste depot and not shoved in the bottom of the garbage bag.  It's not a problem if it's contained, only when it's not disposed of with some care.
* Buy hemp paper instead of bleached white tree paper.
* Use less electricity to reduce the need for coal-fired plants.
* Eat smaller fish, and print a copy of Canada's Seafood Guide for your fridge.

Prevalence / Persistence
* One in six women have elevated mercury levels.  It can damage the brain permanently even if blood levels diminish.

Heatlh Concerns
* Unlike many toxins, it can cause harm at very low levels.  There is no safe level of mercury.
* Itchy rash and uncontrollable trembling are the first signs of poisoning
* Low-grade depression and irritability
* A potent neurotoxin causing loss of memory, brain fog, disorientation...
* Kidney failure
* Minamata disease - named after a city with rampant mercury poisoning
* Could be linked to autism, multiple sclerosis, and Parkinson's disease

Why it's still in use
It's shocking that's it's still in some vaccines, but it will take many letters and protests to get it banned, and to get waste management facilities to recycle CFLs or at least advertise that they're hazardous waste material.  Even Energystar suggests CFLs should go in the normal garbage.

Legislation
* Regulations in Europe and the U.S. means mercury use in products has dropped dramatically over the past twenty years.