Teflon: You’re Soaking in It 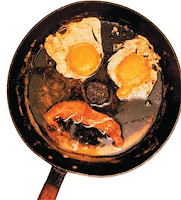 I'm going to do a series on different toxins that are convenient but largely unnecessary in our lives.  Much of my info comes from the excellent book, Slow Death by Rubber Duck (chapter 3).  If you don't have time to read the book, read this instead. It's a good continuation of The Secret History of the War on Cancer.

And first off is my current obsession:  perfluorinated compounds or PFCs such as PFOA and PFOS, also known as C8s. In the book, the authors dose themselves with whatever chemical they're testing to see the effects, like Super Size Me, but with toxins.  PFCs were the only ones that had immediate ill-effects....

Alternatives:
* Stainless steel or iron pans - to prevent sticking, heat the pan first, then add a layer of oil, then add food to be cooked.
* Pop popcorn kernels in a stainless steel pot on the stove.
* Barbecue instead of using the oven.
* Avoid fast food as many of the wrappers are coated with PFCs. Get on the slow food movement.
* Don't spill stuff on your furniture, or, if you're like me, just don't really care about stains on the furniture.  What, are you expecting the Queen for tea?

Prevalence / Persistence:
It's found in Arctic animals and 98% of people.  It's increased by 20% in polar bears since 2000.  It's persistent and bio-accumulative.  Nothing gets rid of it.  Once it's made, it can't be unmade.

Health Concerns:
* Birth defects, specifically facial defects such as cleft palates, nostril deformities, and tear duct deformities
* Liver tumours
* Respiratory ailments
* Cancers
* Increased cholesterol levels
* Plant workers are three times as likely to die from prostate cancer
* Heating a teflon pan to high temperatures will produce fumes that will kill any birds in the kitchen.  They die from "Teflon Toxicosis," a condition known since the 1970s, which means their lungs hemorrhage, fill with fluid, and they drown.  One of the gases produced is similar to phosgene, a WWI nerve gas. People have been hospitalized with "polymer fume fever" which causes flu-like symptoms.

Why it's still in use:
* It's manufactured in West Virginia which has a pro-business environment (aka environmental and labour protection is not a priority)
* We love teflon pans.  Some people pitched theirs, but more keep on buying them.  And we care much more about stains on the furniture than our children having functional gonads.  Enough people just don't know or don't think it's a big enough deal to avoid this convenience.  Waterloo Region thinks it's cool to put PFCs in the green bins via encouraging use of microwave popcorn bags as liners, heat them to extreme temperatures to kill any e-coli in the dog crap in there, then spray them on our crops.  Please send a freakin' e-mail to Ken Seiling or The Record or Waste Management if you have five minutes!

Legislation:
* Dupont was fined millions of dollars in December 2005 for failure to report substantial risk information about chemicals they manufacture.  They knew the health risks back in 1961.
* The Science Panel established a probable link between PFOA and specific diseases and defects.
* Manufacturers of PFOA agreed to phase it out by 2015.
* In Canada one PFC (PFOS) was added to the Canadian Environmental Protection Act's Virtual Elimination List.  So we'll reduce the release of PFOS to below measurable levels.