Everything Does NOT Cause Cancer 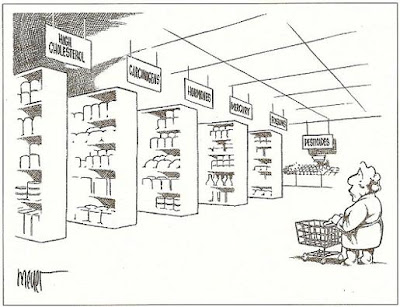 When we dwell on the toxins around us, sometimes it seems like everything is a problem, so why bother.  But that's really not the case.  There have been several chemicals developed in the last eighty years or so that are causing serious problems.  We could dramatically reduce cancer rates today by totally banning these chemicals worldwide.  But we won't.....

In the past week I've written about Teflon (PFCs) in pans and lining food,  phthalates in fragrances and plastics, flame retardants (BFRs) in furniture and electronics, mercury in fish from landfills and electricity and paper production, Triclosan in anti-bacterial soaps, pesticides on golf courses and crops, and Bisphenol A (BPA) in plastics.  Yikes!  But if you notice where all these chemicals tend to be, you can avoid them.

Buy all natural organic materials from people you know whenever you can.  Hemp, wool, glass, steel, wood:  they won't make you sick.  Wash everything with simple, fragrance-free soap, baking soda, and vinegar.  Use cast iron cookware.  Drink tap water from a glass.  Eat low in the food chain - organic fruits, vegetables and grain mainly, and some small fish or grass-fed beef or free-range chickens less often.  Buy as local as possible to reduce the amount of fuel used which reduces how much pollution you breath.  If you're buying electronics, ask what's in them first, and dispose of e-waste, CFLs, and batteries in hazardous waste depots.

But who's going to do that?  A bunch of crazy hippies maybe, but probably not you.  Because fitting in with the latest trends is way more important than being healthy.  It really is.  So we need governments to ban toxic crap outright so nobody can buy it ever. But there are a few problems with that path.

The chemical industry will never admit there's a problem with their products.  Over and over they defend the stuff while people are getting sicker and dying, and they're cashing in on it.  And it's nearly impossible to prove exactly what caused which illness.  Most toxic poisonings are slow and quiet deaths.  And that's what producers rely on.  If governments were forced to adopt a precautionary principle mandate, then companies would be forced to prove each product is completely safe, from extraction to processing to disposal, before they could begin to market it.

Corporations advertise not only the product, but the need for the product.  Remember "new studies" that suggested we need eight glasses of water a day, and that it couldn't come from food or tea or juice.  It had to be pure water??  The studies were created by the water bottling industry.  We don't need 64 ounces a day, and we have no problem absorbing water from other sources.  They wanted us buying lots and lots of bottles of water.  Now there's an area twice the size of Texas in the middle of the Pacific full of decomposing plastic.

And we're told we need BRFs in electronics or they'll burst into flames.  And we need Triclosan on everything or we'll get the plague.  Without perfumes or room deodorizers we'll be friendless and alone.  Without pesticides, we'll all starve to death as weeds and bugs take over all the crops.  We're being made to fear fire, insect, body odour, and germs.  We lived without this crap for most of human history.  I think we can do it again.

Enough public debate on an issue can cause companies to pull product just to avoid the fuss and a potential class-action lawsuit.  But we can't just complain about stuff that bothers us personally, we have to get on board with anything that might cause an illness in anybody.

We're allowing ourselves and our kids to be exposed to tons of chemicals until someone is absolutely sure they harm us. Everybody knows someone with cancer now. We need toxins removed until enough studies make it absolutely clear and certain that each one won't harm anybody in any way.  Only then should they be allowed back in production.