A Little Hope is Effective...

A lot of hope is dangerous. - President Snow 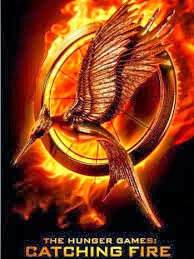 This may be a little hokey, but I think Catching Fire is an important film to see right now.

I read the books ages ago, but even though I know how they each end, it didn't stop me from being on the edge of my seat.  And I was surprised by how inspirational I found the film to be.

Grist relates how the books chronicle what happens after climate change destroys the world and makes for scarce resources for the survivors to fight over.  We have a really interesting crisis to overcome for our time.  It's not us against the state - not just us against the state - but against our own conveniences.  Not enough of us have the foresight to vote out politicians who are supporting the pipelines.  That's one problem.  But a bigger one is that too many of us are sliding into complacency.


Katniss isn't a very good leader.  She's no Martin Luther King.  She's just ballsy enough to be a symbol that inspires everyone towards revolution because she found a way to break the rules.  But that's all we need.  We don't have time to wait for the perfect leader to step up and guide us to the finish line.  We need many small acts of rebellion, from refusals to support a system that exploits people and the planet to marches in the streets.


But instead we're losing hope.  We have enough to stick around and enjoy the bread and circuses, but not enough to change the system and allow our species to thrive for another few centuries.

Even David Suzuki's getting tired of it all, noting what we're up against,


On a swing through Australia in September, he drew criticism for suggesting the country’s new prime minister, Tony Abbott, is guilty of negligence and “crimes against future generations” for scrapping a carbon tax and dismantling climate change bodies. He has stepped down from the board of his eponymous foundation, uttering dark warnings about the bullying of Canadian scientists and the federal government’s attempts to marginalize environmentalists....“Environmentalism has failed,” Suzuki declared in a dark blog post in the spring of 2012. The heady victories of the 1970s and ’80s over air pollution, acid rain, and clear-cut logging are distant memories. The oil and gas industry has never been stronger, sinking ocean wells, fracking across the continent, and going full-bore on Alberta’s oil sands. Meanwhile, the fight against climate change has come to a virtual halt, as governments around the world put the economy ahead of the environment. We’ve come to a point where things are getting worse, not better....Many of the battles that we fought 30 or 35 years ago, that we celebrated as enormous successes . . . Thirty-five years later, the same damn battles have started again. That’s where I think we failed. We fundamentally failed to use those battles to get that awareness, to shift the paradigm. And that’s been the failure of environmentalism.

Suzuki hasn't lost all hope, however,


Nature, if given the chance, will be more forgiving than we deserve. All humans have to do is start paying attention to the flashing warning signs.


Well, that and to become willing to give up luxuries today for survival tomorrow.  This also includes revolting against the government - our current government and one biting at its heels as well as the corporations that control them.  We have to revolt against the policies that promote growth over sustainability, pipelines over wind farms, exploitation over protection, and bullshit omnibus bills over transparency.


Recently professor Alexander Coward decided to cross a picket line, and he sent his students an e-mailed explanation that went viral.  Part of his message fits here perfectly:


Sometimes political events reach into our lives without our invitation or control, and we have no choice but to engage with each other about politics. Many times in history it has done so with far more violence and disruption than a strike, and it is wise to be psychologically prepared for this fact.... For every decision and judgement you reach, there are people who benefit and people who lose out.... There is no way of getting around that. Every judgement you make in life is a question of balancing different interests and ideals.... A previous generation dodged the bullet of nuclear armageddon when things looked bleak, but for your generation the bullets are coming thicker and faster than ever before. The potential all of you in your generation are going to have for both good and harm is tremendous.... However I also suspect that many of you will think something in response along the lines of `I know all that, but these things are for someone else to figure out, not me.’

That is a mistake.

Absolutely.  As soon as we falter and give up the struggle for a better future because we think someone else will do the dirty work, or because we think we're not smart enough or strong enough or brave enough to actually do anything of real consequence, then they win.  They get to keep their wealth and power without the peasants banging on their doors armed with pitchforks - and maybe even a guillotine at the ready.  We need to remember who the real enemy is.


And, like that final scene in Catching Fire suggests, this isn't how it ends.  It's how it begins.