My class toured this historical "museum of conscience" with a survivor of the school as a guide. It operated as a residential school from 1828 to 1970. We weren't in the original building because it had been burned down and rebuilt twice. Some schools were burnt down and not rebuilt, choosing instead to ship the inhabitants elsewhere. This site persisted. The roof leaks now, so there was water damage, but Wynne promised some funds to help restore the building. They plan to furnish the empty rooms the way they were when it was operational.

There's part of me that so loves old buildings that I can divorce myself from their history enough to notice the trim work, carved pillars, and tin ceilings marred by fluorescent lights. I would gladly offer my labour to restore it, but it smelled like they might have a mould problem from the water damage that would require a professional to clean.

There was too much to see and discuss in one short visit. I suggested to my class that maybe the institute could make it an overnight trip once they have beds and desks. Then tour groups could experience sleeping in an open room with nothing but mush for breakfast (overcooked oatmeal). But I had no takers keen to spend a night in there. They had a better idea though: an audio headset for self-guided tours using the voices of a variety of survivors discussing their lives as visitors walked through different rooms:

A talk by a younger guide whose grandparents had attended brought a few surprises. Hitler had used the early reservation system and residential schools, solutions to the "Indian problem," as a template for the "Jewish problem" almost a century later. I had no idea.

But even more thought provoking was being referred to as "you people," as in, "How long have you people been a country now? 160 some years?" That one sentence shifted my thinking considerably. After reading John Ralston Saul's Fair Country and Comeback, I had gotten a lovely impression that Canada is one big family just waiting for us to return what we stole so we can finally see that we're all in this together. But that line made me realize that, for this guide at least, being united under Canada is not an option. She's from North America, not Canada.

I started understanding it all something like this: It's like if two siblings are sharing a place, and the brother's a jerk to the sister, and the sister gets her own place. It doesn't really matter how much the thoughtless brother apologizes, because it's not just about that. The sister has her own path that's separate - will always be separate - from her brother's path. It was a pipe-dream to think they'd live together forever. They're family, but have always been independent of one another.

A student was offended by the comment, but I was just saddened by finally getting that we're on parallel paths that won't merge - maybe aren't really meant to merge.

And the day brought a clearer understanding of the intergenerational effects of the schools.  So many studies have found evidence of things like childhood trauma being linked to later drug and alcohol abuse, and moving during early adolescence (when teenagers on reserves are shipped off to high-school) correlating to a higher incidence of suicide. We know that a rough childhood is hard to get over. When both parents grew up restricted from forming bonds with other children, they can struggle to relate to each other much less their children. When it's suggested that people should just forgive and forget the past, just get over it already, it makes no sense to me. 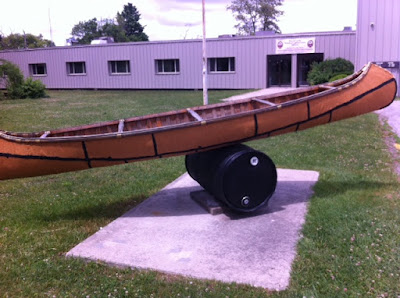