Water on the Table 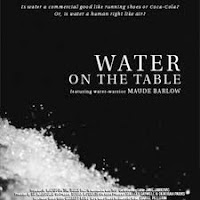 I saw this film yesterday with the filmmaker, Liz Marshall, there to talk afterwards. After seeing Sharkwater with Rob Stewart there, I learned never to miss a filmmaker talk about his/her film.   They always have a few good stories to add.  Plus, I think I fell in love with her a little bit.  Check out this protest letter she wrote, apparently not her first, when she was 8.

She followed around Maude Barlow for a year.  By sheer luck of the dice, it happened to be the very year that Barlow was the Advisor on Water to the UN.

The rich will drink; the poor will die.

Here's some random notes from the film and discussion.  The film was very heartfelt.  I lean towards just the facts.  See the film if you want to laugh and cry.  Read this for the bare bones of the message.
Water as a Commodity:  A History

Under the FTA (a precursor to NAFTA before Mexico was entrenched), water was included as a potential commodity for sale.  NAFTA added new dimensions to that, and a 40-year debate has ensued.  Under NAFTA, once one province decides to sell water, all of Canada has to sell it.  We need a treaty at the UN on water.

Water is Canada's sacred cow and should benefit all of North America according to Bob Pastor who figured prominently in NAFTA's regulations.  I think he has a point - sort of, and a commenter afterwards brought this up again.   We need to share the water, but selling it puts the power in the hands of the corporations.  We need to be able to keep water where it needs to stay, as part of the ecosystem, and not drain it from environmentally sensitive areas.  We have to think about it as a very fragile resource, not a commodity.

The private sector can offer cash to invest in sewage systems and treatment plants, but when they get involved, because they're entirely profit motivated, either the rates go up or they cut corners on quality.

Canada only has 6% of the available drinking water in the world, not the abundance people think we have.  The Canadian government still opposes water as a basic right.  In July 2010, there was a motion made by Bolivia for a vote on water and sanitation.  The majority of the UN said yes, water is a right.  Nobody voted "no," but there were many countries who abstained from the vote including Canada, Australia, and the U.S.  We're still stuck in the market model approach to water.  Now, because of this vote, water as a right is a "soft law" - it's a commitment, but it's not legally binding.

The worldwide trend is towards privatization of water.  This is why it's so necessary to fight each action.

We've been extracting bitumen from Athabasca since 1967.  For every barrel of oil taken, 3-5 barrels of water are destroyed.  Right now, three million barrels of water are destroyed each day.  They clear-cut a forest the size of Greece to access the oil.  The water in the tailing ponds leeches north into the 1st Nation area of Fort Chipewyan, where cancer is rampant, likely from the toxic sludge.  If it flowed South into the city, people might do something about it.  As it is, the 1st Nations people used to be able to dip a cup into a lake to have a drink.  Now their water's all toxic.

Alberta will be out of water soon.   The tar sands will triple capacity by 2015.

The picture above is of Moldor, not Alberta, but that's how Barlow kept describing the landscape. 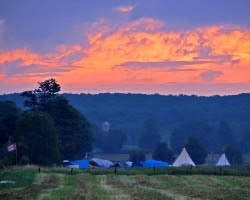 Apparently, Simcoe County, just northwest of Barrie, has the cleanest water in the world.  I didn't link that because, while there's plenty of sites that claim that to be fact, I can't find any with any kind of proof.  If you've got a good link, let me know.  Otherwise, it's right up there with Goderich being the pretty town in Canada.  It's more of a cultural belief than a fact.

Regardless, there was a proposed dump site for the area, an important piece of real estate for groundwater re-charging.  Tons of people protested and won.

AXOR is an Independent Power Producer (IPP).  They move too fast to be easily stopped.  AXOR is controlled by Dupont.  It started asking for 20% of the water, but then shift to up to 90%.  Thousands of people protests, then the contract was cancelled.

She also interview Jim Prentice, but his footage was unusable because he talked in circles no matter how many direct questions she asked.

It was in some way sponsored by Alternatives Journal.