On Judging Evilness in Others

This summer I'm having a tryst of sorts with Montaigne. I'm at the point in the relationship that I'm agreeing with everything he says and marvelling at his brilliance. He's quite a catch! Too bad he's dead. But he did seem pretty lazy when it came to maintaining his estate. Probably just as well. 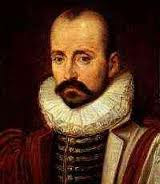 In "Inconsistency of Our Actions" he says,

"...a sound intellect will refuse to judge men simply by their outward actions; we must probe the inside and discover what springs set men in motion" (lines 298-300)

That's old hat these days. People rarely follow this advice, but it's out there. And many times I've tried to ignore the chatter and get to know someone that others condemn only to find the gossip more accurate than I had hoped. But what I want to ask for clarification on is this: If we probe the inside and discover evilness, then what do we do with that knowledge?

I have a friend of dubious morality. It's not my place to judge his actions, so I actively refrained and continued the friendship rationalizing at length to the voice at the back of my head. I figure I can't tell the consequence of the perceived lack of ethics, so I can't really condemn it. And I don't know the whole story, so there could be many other factors that come into play that affect whether or not the action is truly unethical in the first place.

But then one day I heard the intention of the action straight from the horse's mouth: a deliberate intention to harm the innocent, and even a celebration of the ability to cause harm! 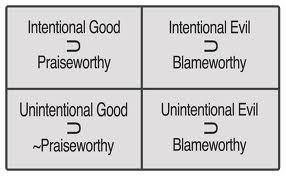 So now what? Do we continue a friendship with someone we know to willingly cause others harm, condemn the person publicly, or just wander off and try to forget the whole thing? It's been bothering me enough to wake me up at night. I don't believe anything I say could change his belief about the necessity of his actions. The Stoics suggest that we can be happiest if we can figure out what we have control over and what we don't, and only try to act on what's within our control. But accepting what we can't control is the challenge.

What if my continued friendship inadvertently supports his actions and therefore makes me an accessory to the pain caused to people being harmed, kind of like the way shopping at Wal-Mart allows for further abuses of low-wage employees?

The end of Montaigne's paragraph might help a bit:

"But since this is an arduous and hazardous undertaking, I wish fewer people would meddle with it" (lines 300-302).

It is a hazardous undertaking to know the motivations of other people. This is one area where perhaps it really is better to remain ignorant because once you know, you can't un-know. And then you can't help but look at them a bit funny when they walk into a room.

Some useful words on the necessity of remaining sceptical from "It Is Folly to Measure the True and False by Our Own Capacity":

"Why do we not remember how much contradiction we sense even in our own judgment? How many things were articles of faith to us yesterday, which are fables to us today? Vainglory and curiosity are the two scourges of our soul. The latter leads us to thrust our noses into everything, and the former forbids us to leave anything unresolved and undecided" (lines 170-178).

So, perhaps it's the case that in time I'll realize that this intention isn't as bad as I thought? I actually worry a bit that I'm becoming more prudish with age. I'm still on the outer edges, but I sense a moving inwards that I'm not pleased with. I'm getting weary of novelty and beginning to enjoy tradition more than I thought I could. If it's the case that ten years ago I would have been entertained by such a situation, maybe in another ten year's time, I'll laugh again.

In this case, I don't think so. But one never knows.

When Montaigne's best friend died, he coped by distracting himself by thinking of other things whenever grief crept up again. But it's harder to do when you're trying to distract your thought from someone still living who wants to go for a beer with you from time to time. I think it best to go the forgiveness route of JC and see this entire episode of my life as a means to better learn acceptance and understanding and a reminder of human fallibility. As Tolstoy advises in "The Godson," we can't stop evil in the world, we can only try to stop ourselves from adding evilness to the world.

With a nod to original sin, Montaigne writes,

"...it seems to me that we can never be despised as much as we deserve."

But why I adore him so is that this line isn't a condemnation, but a reminder that we're silly creatures just muddling about trying to make the best of our situation. And we're all in this together, eh.