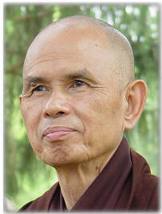 On yet another urging recommendation, I finally read The Miracle of Mindfulness by Thich Nhat Hanh.  But I didn't read it well.  I'm a picky reader.  I can immerse myself in difficult philosophy readings, but this was a struggle.  I happily read all about Montaigne's thoughts on mindfulness, but I was trying to read this mindfully instead of expediently.  I found it repetitive, and ended up doing much of the reading in front of a movie just to get through it.

He cautions against following philosophical doctrine:


"If one clings merely to a system of concepts, one only becomes stuck.  [Instead we must] penetrate reality in order to be one with it, not to become caught up in philosophical opinion or meditation methods....The finger which points to the moon isn't the moon itself."

Uh oh.  That's totally me, stuck following doctrines instead of... doing that other stuff.

Okay, I'm still not there.  I really appreciate contemplating on Taoist and Buddhist thought, but I can't bring myself to set aside the time and attention necessary to live it as thoroughly as this book suggests.  Even trying to do breath-work for a minute a day is a struggle for me.  And I hate yoga.  Part of the reluctance might be that I was really into it all as a teenager, so doing it now feels like I'm trying to be a kid again.  I feel like I should be past all that now.  But I still got something out of my superficial reading of the book: 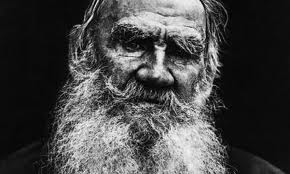 The whole book and theory is about maintaining awareness of the present.  If you're not present right now, then you're not really alive right now.  There was a Tolstoy story that I loved.  The moral is that the most important time is now, and the most important people are whomever you're with, and the most important thing to do is to bring joy to the people you're with - even if it's your enemy.  In the story, the person learning the lesson ends up saved by unwittingly helping an enemy.  It's similar to other Tolstoy stories.  Don't bother with revenge, just don't add any more evil to the world.

Thich Nhat Hanh suggests we don't look at life divided into parts that you give to others, at work, with kids, etc.  Each moment you spend with others is your own time that you get to spend with others.  You have unlimited time for yourself.  It's all for you.  That's a useful perspective to keep in mind when I feel like people are draining me because I have something else I'd rather be doing.  I'm impatient whenever I'm not really here right now.

It's all a matter of perspective.  When my kids were babies and up all night sick, as I'd walk the halls jiggling and patting the little one, I'd tell myself that this is a great opportunity to hug my kids.  When they're older, they probably won't let me hold them for hours and hours (and hours).  It really helped me to appreciate the time instead of becoming bitter or complaining.

Once I took my then 3-year-old to the dentist.  She wanted to walk, so we left the stroller at home.  On the way back home after a stressful afternoon of waiting and all the excitement of a new experience, she wanted to be carried and promptly fell asleep in my arms.  While I carried her the many blocks home, I imagined I was running a marathon with fans cheering me on at the edges of the sidewalk.  That fantasy helped me carry on, to feel strong, proud and grateful for the exercise I got instead of miserable from the burden of a heavy child. It was a useful delusion.

There was a good little parable about lettuce.  If the lettuce doesn't grow well, we don't blame the lettuce.  We blame the sun or rain or soil or rocks or bugs or rabbits.  We should be as compassionate with people when they "are still imprisoned by false views, hatred, and ignorance and continue to create hatred, and ignorance and continue to create suffering for themselves and for others."  And we should have compassion for ourselves too, of course.   Take "care for one's self, not being preoccupied about the way others look after themselves, a habit of mind which gives rise to resentment and anxiety."

Montaigne suggests we maintain mindfulness by writing about what's happening right now, and just by really paying attention to what we see and hear.  That's doable for me.  It's a start.  But I'm still going to mentally multitask from time to time, still going to think about life and ideas while I do dishes instead of just doing dishes.  And that's okay.  I can try to really be with people when I'm with people, but the dishes are less affected by my attitude.  And I like to think.