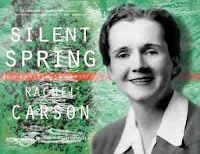 On a student's recommendation, I checked out the book The Fly in the Ointment by Dr. Joe Schwarcz.  I'm always going on about the increase of toxins in our environment and how to avoid getting overloaded.  Schwarcz insists eating spoonfuls of DDT is perfectly safe and that Rachel Carson (of Silent Spring fame) used junk science to convince the masses that DDT is harmful.

Schwarcz examines one of the many studies from Carson's book and shows how the treatment group of birds (exposed to DDT) had almost as many eggs hatch as the control group (no DDT).  And there are a few studies that show no harm, in fact an improvement in egg hatching.  Therefore, according to Schwarcz, all her studies are flawed.  I was just about to count the number of principle sources she used in her book, but they take up 53 pages of notes, and I don't want to count that many.  Suffice it to say, that study he jumped on wasn't the only study she used to back up her claim that DDT affects fertility in birds and likely affects fertility in people.  Eating a spoonful of DDT won't kill you.  But if you're a woman, and you inhale the stuff over years because you live on a farm or near a golf course, you might end up having problems conceiving.

Schwarcz laments the many children dying of malaria because of Carson, but Carson never advocated for a total ban of DDT, she just wanted it much more controlled than it was back in 1962.  I agree with both of them that spraying to stop deadly malaria is a good use for this pesticide.  Spraying it on our fields as a regular practice here - not so much.  And, most importantly, spraying it on lawns and golf courses to kill off cinch bugs and other "pests" because we love the aesthetics of a monoculture - not at all.

Schwarcz also is a consultant for Monsanto.  Just saying.

There are a lot of conflicting studies and scientific expertise on different scientific topics.  Carson is a marine biologist with a masters in zoology.  She wanted to do a PhD, but had to leave school to support her family. Devra Davis is an epidemiologist with a PhD in sciences and post doc work in oncology.  Schwarcz has a PhD in chemistry.  When PhDs conflict, how do we know what's true?

We can take the time to look at the research the scientists have studied.  It's especially important with "pop" science and social science books.  I did that with The Tipping Point series.  The studies are fun and interesting, but I want to withhold judgment until I read the original studies. It's usually pretty easy to find them on-line.  Look for controlled and treatment groups, large sample sizes, random samples, isolated variables, if the studies were repeated with similar results, and other markers of good scientific research.

A fast method, though, and the bottom line for me is that if we can live without certain synthetic products, then we should.  Eat low on the food chain, free range, organic, when it's possible, and here and now, that's really easy to do.  Avoid plastics and fragrances.  Really none of that is a big deal or difficult.  And I don't think it's paranoid to avoid buying a whole lot of crap we don't need.  Also, when studies conflict, always follow the money.  If Carson made up her studies (or Davis), what would she have to gain from that?  But Monsanto has a whole lot to lose if they can't find some PhDs to rail against these claims that pesticides can harm us.
Posted by Marie Snyder at 2:22 PM