A bit of Montaigne,

Such as are in immediate fear of a losing their estates, of banishment, or of slavery, live in perpetual  anguish, and lose all appetite and repose; whereas such as are actually  poor, slaves, or exiles, oft times live as merrily as other folk.

When we fear losing our stuff or status, we can’t really enjoy either. And isn’t that a waste. Epicurus agrees that we can only really enjoy pleasures when we’re free from worry.

There’s an old Zen story about a great warrior who had a favourite teacup. He almost dropped the cup, and was shocked by his own fearfulness and anxiety over it. He had faced thousands of armed men, but never did he feel so frightened as when he almost broke his cup. So he smashed it and lived happier for it.

I think the same story could be told of a leader fearing his loss of position.

Three things I’m reading and doing meshed together for me today.

First of all, there’s much being written elsewhere about Obama, Cameron, and Harper being cowardly. (Keep in mind that bathroom incident could just be a rumour.) Some people chalk it up to weak leadership of each of the three, and others think it’s a sign of groupthink, which implies that any one of us in any of their positions would do something similar. Can any of us really stand up to peer pressure once on the inside of the political system? Well, a few good leaders were able to along the way, but anyone else?

And then I was reading about the problem with many studies that try to prove that our gender defines us. And I wondered why that bias towards essentialism doesn’t seem to shift at all. How does it benefit us to continue to believe that a large part of our behaviour and attitudes are determined by our sex?  There are many studies on either side of this issue, but the media bias seems to be with “boys will be boys.” There are some problematic implications that come with this belief system, and it’s curious that many men and women don’t seem to want the situation to improve. Is it that we actually prefer the traditional roles?

Finally, I’m working with some neighbours to develop more significant community engagement in order to start environmental and social justice initiatives both locally and worldwide. We all agreed we needed a website with a “skill swap” section where we could find out what people are able to do so people in need can get help or resources or whatever tools they need to improve their lot through neighbours instead of agencies. So I added us to i-neighbor.org and encouraged people to sign up with a first name, a photo, and info about their abilities and interests. And people are reluctant. They want to develop community, but I’m afraid the reluctance is because many believe info on the web, even just a first name and interests, will lead to cyberbullying, identity theft, and stalking. So the community website is void of any real information about one another beyond first names, rendering it all but useless. We can’t work together if we’re afraid of each other.

But I also wonder how much people really want to positively affect their city and the world anyway.  I don't think it's just laziness or busyness that stops us.  And it's more than just fears of internet crimes.

The intersection of these three issues is an underlying fear of responsibility. We’re afraid to change because it involves accepting responsibility for rocking the boat. We spin our wheels making thing not work with half-assed attempts, or bureaucratic leadership, or meetings that are so egalitarian that nobody will act without a consensus. And nothing happens. If we do nothing and the world implodes, then we can claim we weren’t really involved, or we hadn’t yet begun. We can still claim ignorance and innocence. But once we act, once we really being, we broadcast that we know we can do something. And now if we fail, which we likely will a few times, then it’s our fault at least in part.

It’s scary that our actions and attitudes can actually have a marked effect on other people. And sometimes what we do backfires and we end up looking stupid, or we might even make things worse. But if we do nothing, then nothing gets better. Few leaders can be the ones to refuse to back a bailout or refuse to help with a war effort. Few people are willing to allow for the possibility that domestic roles or other gender assignments aren’t cut in stone; broaching that issues can be dangerous territory. And there are risks to letting people get to know a bit about you. There are risks they won’t like you, or they’ll harm you in some way. Any act of environmentalism or social justice could suggest we know we’re partly at fault, and that’s a heavy burden to carry. And if we start, do we have to keep on doing it? That’s a lot of work.

If we have a passion for change, we need to muster courage to act on it all the way.

A bit of Kaufman, 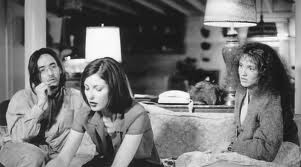