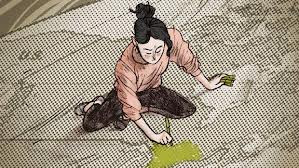 A week ago, The Globe and Mail published an "essay" on the Facts & Arguments page about a woman who has chosen to retire from being an ecowarrior.  (Remember about twenty years ago when that page actually had essays on it - rigorously argued claims of interest instead of personal anecdotes??  Anyway...)   I can't link to articles from The Globe anymore because I don't pay for the on-line service - but I did get the photo attached.  You'll just have to trust my quotations are accurate.

Lynn Lau decided she's tired of doing environmental stuff because the world's not actually changing anyway.  Her efforts aren't affecting anyone in a meaningful way.  She complains, "It's a thankless, deeply depressing affliction to care about the environment.  Despite our efforts, the planet remains far from saved."  She goes on to explain that, "...to be an environmentalist you need to be a misanthrope at heart - distrustful of authority and individualistic."

My counter in brief:  Get over yourself.

Doing good works is about doing good works.  It's not about saving the world or influencing seven billion people to change.  Focusing on the outcome and having unrealistic goals in general will doom anyone to failure - to depression and withdrawal.  But it's not environmentalism that's the problem; it's that misplaced focus.  We can never really be sure what our actions will produce, or what will happen in the future.  We could all embrace vegetarianism, then get hit with a meteorite.  Who knows?!  So it's with folly that we follow that path.

If, however, we live with a focus on our intentions in the present, and on the little things that do work, then environmentalism can be deeply satisfying.  When I take out a large bin full of waste every night at work, waste diverted from the landfill and into compost, it's satisfying even though I know another three bins will end up in the trash.  Which is a better way to live right now:  to throw up our hands and say I can't fix everything so I won't do anything, or to gain pleasure from doing our part however small and insignificant it may seem?  We don't have to do everything to get pleasure in having done something.

Part of the problem the writer seems to have is that the amount of effort she's spending isn't matched by any incoming rewards or pleasures.  The problem may be two-fold: she's working too hard, and she needs honour to continue.  I live a relatively eco-friendly life, but I find it brings me more pleasure than pains.  It's all a matter of enjoying whatever you're doing.  I compost in my yard, but I love working outdoors.  Same goes with hanging laundry on a line in the sunshine.  My recycle bins are organized enough that we don't have to think too much to sort waste.  And I feel great walking and biking everywhere - not in a self-righteous way, but in a wind in my hair kinda way!   And I don't do the things that bring me no pleasure.  Lau complains about raising chickens and maintaining her garden.  I hate vegetable gardening, but I live near a market.  It doesn't make sense for me to produce my own food when I can buy it from other people who did a great job growing it all.

The bigger problem than effort is the craving for recognition in some form of praise or a visible effect on the world or the people around us.  For a few years now, our school has been an official eco-school.  It's an effort for me to fill in all the required paperwork and do all the running around to prove we're environmentally motivated.  After a few years of getting gold-standing, last year, we didn't qualify.  We didn't stop doing anything environmental, we just didn't prove it as well as we normally do.  And this year, I'm having second thoughts about the whole thing.  Tracking what we do, and proving it with photos, is work.  There's no pleasure in the act itself, merely a minor reward at the end:  a sticker that suggests we are worthy.  It's just a tool to impress people with our school, and we already know we're on it.  It was a great way of getting people to start recycling and reusing, but now that we're doing that with just occasional reminders, I question the need to continue reporting to an official external body.  Reducing my consumption of over-packaged over-processed crap at the grocery store is a no-brainer, but weighing garbage and filling in forms for recognition is tedious and anxiety-provoking.

Lau's suggestion that environmentalists are necessarily misanthropes is just weird.  We can understand human nature - that our immediate rewards tend to win out over long-term punishers - without contempt for one another.  We do need to recognize that people need reminders over and over to reduce waste and energy, to walk past the car in the morning, to avoid buying a new whatever when the old one works just fine.  And governments need reminders that this stuff matters, and that enough of us care to make it worth their while to change a few rules to make it easier to do what's right.  We are all fallible, but that's what makes us interesting.

She closes with this: "If this is a sinking ship we're on, I'm going to quit bailing for now, and take a seat on the deck to enjoy the view."

Can't it be both?

A bit from the Talmud: A group of workers has been given a big, complicated job to do. They complain, “We do not have the right tools. The task is enormous. We will never be able to get it done.” The rabbi replies, “It is not for you to complete the task. But you must begin.”