On Excuses for Not Having Sex

I wanted to chime in on a facebook discussion about that list (a man made a spreadsheet of his wife's excuses for refusing sex), but it wasn't started by an official FB friend, so I couldn't comment on it.  I'm not sure the etiquette on this, so I'll just keep everyone anonymous.  Here's the opener attached to a link that suggests women never owe men sex: 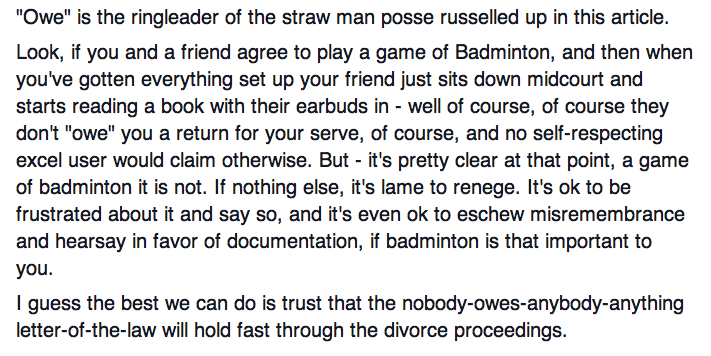 This analogy seems to suggest that, like a game of badminton in which nobody actually hits the ball is not actually a game of badminton, marriage in which nobody has sex isn't actually a marriage.  That's an archaic notion of marriage, and even in more religious times the union needed to be consummated only once to be validated.  Today, sex isn't necessary to prove a marriage is valid or invalid - even in religious circles.  I know more than one Catholic who's had a marriage annulled even though there were children produced.  Having sex doesn't make a marriage and not having sex doesn't unmake one.

And this is a progression to be celebrated.  There was a time when raping a woman was enough to legally make her your wife.  Now, here at least, it's illegal.  We've come to a place in which whatever people want to do sexually between consenting adults is accepted.  It's their own business.  But one choice that's less accepted is the choice to abstain while in a relationship.  It's curious how all or nothing we are about that. 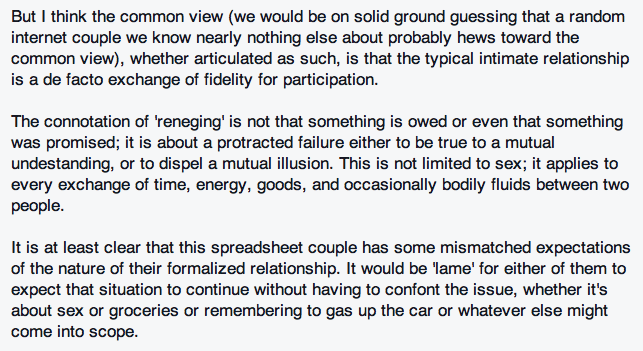 Let's look closer at "a de facto exchange of fidelity for participation."

There's nothing in marriage vows suggesting sex is a necessary part of the union, but we can skip that type of argument and look at what the culture actually believes about marriage.  I think he's right that many people accept this type of agreement - at first.  But things come up.  Kids happen and people get tired or bored or sick of playing a game that they don't enjoy as much as their partner does.  Maybe they never actually "win the game," so to speak because their partner wins too fast every time.  Whatever the reason, I think in the first blush of matrimony there may be an assumption made that sex is a significant part of the marriage, and too many people unwisely don't discuss the what if's around this assumption.  But later on, it seems some people acknowledge and often accept a waning of interest.  The mutual understanding shifts over the course of time.

I'm not a marriage advocate largely because I don't think we can actively promise to love another until we die (as explained in this), but I also think it's too much to ask to promise we'll be the same kind of person and want the same kinds of things for decades into the future.  We are beings constantly in flux, yet some marriages expect consistency.  It's wonderful when people grow and change together, accommodating changes as they arise and working through them, but sometimes the changes are too great to be accommodated.  That's just life; it's nobody's fault.

Furthermore, because many people believe it to be true, that marriage is an exchange of fidelity for participation, doesn't make it right.  Just because it is that way for many people, doesn't mean it ought to be that way.  As we evolve to recognize individual rights, we have a moral duty to respect that we all have a right to do what we want with our bodies.  If a partner wants to have sex, it has to come as a  request, not an expectation.  That spreadsheet-man's wife's reasons for saying "no" to sex are seen as "excuses" implies that he believes sex is her duty, a chore, and she's trying to weasel out of her responsibility to him like a kid explaining why she can't clean the bathroom right this minute.  But it's not a duty for her to perform while she lies back and thinks of England.  Sex is an act to be freely shared between partners.

Ideally marriage is about caring for another without expectation.  It's about loving another person, which is not self-seeking and keeps no record of wrongs.  It's a public gesture that makes a commitment to care about the well being of another.  Publicly humiliating a partner by posting "excuses" online shows a profound lack of care and respect.

I agree with the writer that the couple needs to "dispel a mutual illusion."  They clearly need to have a conversation, and spreadsheet-man has approached his personal problem in, I think, one of the worst ways possible.  No matter the initial intent of their marriage, that's changed, and they're not coping well with that reality.  It's a very real and serious problem for people when they're mismatched sexually, I agree, because they've promised not to go elsewhere.  It's not like if one person wants to see a movie, and the other declines, and the desirer can call a friend.  But that's not enough to suggest the solution is the assumption of participation.  Almost any two given people will have different desires at different times, and there are myriad ways to cope with that reality besides "Participate when I want it or we're over!".

Most importantly, a mismatch must be seen as just that.  There's no right amount of sex to have, so someone agreeing to it three times a month must be accepted as much as someone wanting it several times a day or never at all.  It just is what it is.  A mismatch is a problem for both the person not getting as much as they desire, and for the person denying the request, but it's only a problem at all if people hold sex in their relationship as more important than care, respect, and love.  If you care enough, you can become attuned to one another's needs.  It might mean not asking even if you're feeling it, and it might, for some people so inclined, mean doing things you're not really into right now.  Love isn't about giving everything of ourselves to another person, though, or solving all their problems ourselves, it's about caring about their issues enough to be there while they find their own way.
Posted by Marie Snyder at 8:23 PM