A post in which I gush a bit about it all.

Jane came to my city last Wednesday night. I had so much to do this week, but I had the tickets already, so I went begrudgingly. Yet when she walked on stage, I surprised myself by getting a bit teary. It's a curious reaction to meeting a pivotal role model from my childhood, someone whose life I envied right up there with Farley Mowat's life (possibly) in Never Cry Wolf. And I didn't even meet her - we were one row from the furthest point from the stage. But still...

She radiates warmth and humour and genuine kindness. She embodies love and patience. She speaks slowly and deliberately as she sipped from a flask of whiskey throughout the evening. She's on a tour of speaking engagements which she does without taking a speaker's fee so that all the proceeds can go to saving habitat and animals and people. She's living a truly ethical life; she should be revered as a wise woman, an elder - one of very few who might be able to guide us out of this mess.


And here's what she told us (loosely paraphrased unless in quotation marks):


"When nature suffers; we suffer."

She grew up with a childhood love of Tarzan ("He married the wrong Jane!") and Dr. Doolittle. A series of serendipitous events and a whole lot of hard work led her to be able to follow her dream. It was secretarial school that enabled her to get a foot in the door with Leaky, which is a good reminder to students lamenting the uselessness of some tasks: "You never know when something's going to be useful." She was able to continue her work at length after making a breakthrough in behavioural science when she was first to observe a chimp using a stem to extract termites. Chimps making and using tools meant we have to, "either redefine man, redefine tools, or accept chimpanzees as human." And then, without any prior university training, she was accepted to Cambridge to do a PhD in animal behaviour.

Our closest relatives are bonobos, followed by chimps. There's just a 1% difference in DNA sequencing between humans and chimps, and they can be seen kissing, holding hands, being good and bad mothers. They have a very long childhood with up to five years of suckling and sleeping in the same bed as their mom. Unlike many animals, not everything they do is instinctual. Like us, they learn by observation, imitation, and practice. And, like us, they can be brutal. I wrote a bit about the chimp wars before in which one group completely slaughtered another for the territory, killed the adults, and took the young girls. But they also have profound empathy. If an infant is orphaned, older siblings or other community members, sometimes even the alpha male in the group, will take care of it. We can learn so much from unobtrusive observation of other primates. 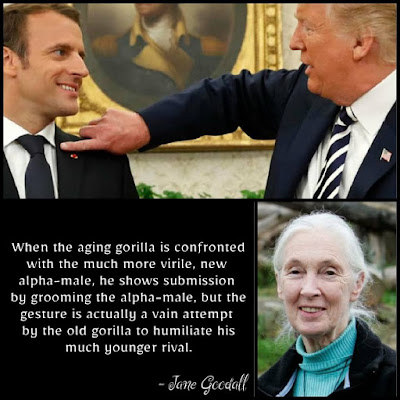 Despite our many similarities, we still allow chimps to be caged and isolated to be studied and used in research or for our entertainment. There's an active market that trades in live animals.

She learned that, in order to save the animals, we have to help the people in the area. So her organizations, JGI, loans money to women (who are more likely to pay it back), and works to stop forest destruction and restore fertility to the land so people are able to grow their own food again. If we can alleviate poverty, we can decrease violence between people, and then we will have the energy to help heal the land so biodiversity can flourish again. She found, in talking with children and teenagers, that they're depressed and angry because they feel like there's nothing they can do with their compromised future, so she also developed Roots and Shoots to empower youth with projects around people, animals, and the environment.

We have to think in a Seventh Generation way, but we haven't borrowed the land from our children, we've stolen it. We're living selfish lives obsessed with money, and we've forgotten how much we need nature to survive. Too many of us are apathetic and living unsustainably. That 1% difference between chimps and humans is huge. Chimps were able to get termites from a mound, but we can make a rocket ship. We have an explosive intellect, and we need to use it better to alleviate poverty, reduce population growth, and end factory farming and political corruption.

She listed five reasons for hope:
1. Children: Young people are beginning to rise up to change the world.
2. Our brains: We're starting to come up with innovative solutions around having a lighter footprint.
3. Resilience of Nature: Trees are coming back in areas formerly destroyed. Given enough time and space, nature rejuvenates itself.
4. Social Media: We can bring the voices together of people who care about climate change.
5. Indomitable Human Spirit: We tackle the worst crises and don't give up.

And she told us all to read The Secret Life of Trees by Colin Tudge. Her closing words were,


"Work hard, take advantage of opportunities, and never give up. If you think you're right, then have the courage of your convictions. Don't forget that every single day you live, you make an impact. If you have gifts, you have to try to use them!" 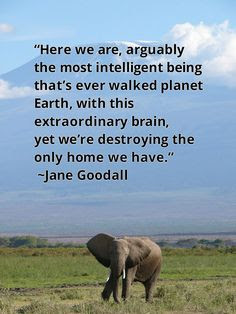 The evening left me feeling like I've spread myself too thinly with all the things I like to do and think about that I haven't focused enough on any of them to actually bring anything to fruition. I'm in Plato's wild beast stage, the lowest form of person, ineffective and just spinning my wheels. But perhaps it's what I don't do that has the most impact, the things I avoid buying if they're not essential and the places I avoid going if I can't get there on my own steam. And I spread the word. It helps to believe that it has an impact regardless how miniscule.